There are a lot of things in this crazy world I don’t understand. I don’t understand the military budget of the United States government versus the educational budget. I don’t understand how Superman became so popular, when you’re reading a comic/watching a film about investigative reporters who can’t figure out who this Superman is when it is a guy they have known the whole time (only he takes his glasses off).  END_OF_DOCUMENT_TOKEN_TO_BE_REPLACED

I have no story today but I do have a picture. I’ll let your imagination create a story for this one. 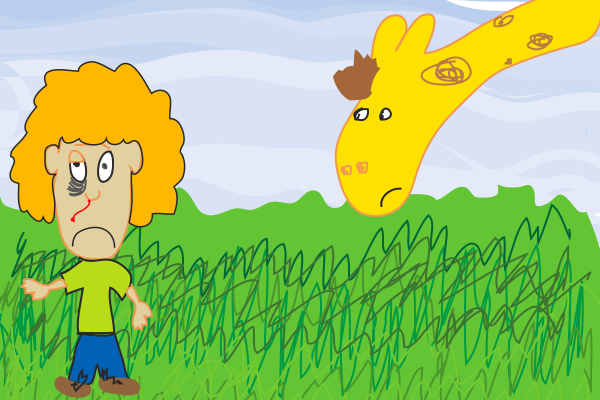 Wow, I actually drew an entire person, not just the torso. Things may be happening for me after all.

It has been almost 6 days since my last entry. I don’t want to be one of those bloggers who claim ‘life is to busy’ and such, but that’s the real deal. There is a lot of action going on here. Plus, I barely have internet at my house right now, so it’s hard to upload new business.

Enough about me, how have you guys been? Good? That’s good to hear. Did you see that new Hulk movie or did you see The Happening? I pretty much liked that green monster film but have been a little scared to see that other one. I just don’t know if I can rock that style, naw mean?

But all of this is pointless really. Stupid questions to make up for my lack of an interesting story or what not. I have, however, come up with an idea to tackle this summer. I am going to be creating some pictures in the real world. Yes, you read right… I am going to take on the art of real art – painting with real brushes on a real canvas. How crazy is that? Depending on how they turn out, maybe some of you might be interested in an authentic Picture of Doom, eh?

Or not. Whatever. For now, here is another binary drawing of absolute doomness. I promise more tales of intrigue and delirium before the week is over. But none of this matters to any of you right? Because no one reads this blog anymore anyways. I guess everyone is tired of me recycling the same Illustrator tools over and over, thus making all my brilliant masterworks look the same. Sorry. How about this? 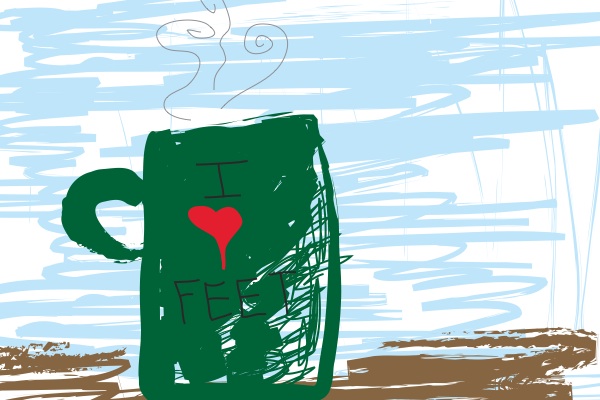 Last night I went to this place is this uber-rich/land of plenty asshole section of Orlando called Millenia. They have this fancy mall there and an Ikea store. Anyway, at this mall, they have this place called the Blue Martini. So I went there last night with a gathering of people for some person’s birthday whom I never met. But I decide to put on my best. A button down shirt with my regular jeans (you know, the jeans I wear every single day) and my 2 year-old Pumas (complete with holes and such). But the guy at the door wouldn’t let me in with that, until I “hooked him up” with some bills.

I obliged. This wasn’t/isn’t my scene at all but it’s been about 48 hours since my last drink and something needed to be done.

About an hour later, we all walk outside but on our way out, this tall motherfucker walks by us. This guy in the group says, in a Scottish accent, “Shite man, do you know who that was?” I look back and the tall man is gone. “No dude, who was it?” “That was Michael fucking Jordan.”

Apparently this Blue Martini place is an infamous hangout of his. I guess he goes there every time he is in town. But I don’t watch basketball, so I kept walking outside.

Later, I had to go back in and pay my tab. On the way out for good, I look over to the VIP section he is sitting in. Sure enough, it was Michael Jordan. That guy from those underwear commercials with Cuba Gooding Jr. I remember him in Spike Lee’s He Got Game though he was only in it for 6 seconds. And nightmares prevent me from forgetting Space Jam.

But there he sat, watching some basketball game on one of the televisions, with his hoop pirate earing glistening in the dim light. Who sat next to him? Tiger Woods, with his signature smile and a pink polo. It was weird. I know balls about sports but I understand that these are two of the best players of their sport ever. Patrick Ewing was also there but I didn’t see him.

On my way out for the night, I passed by that section. I looked over again, out of pure curiosity, and noticed Jordan looking somewhat in my direction. So I raised my fist at him, gave him a fistagon if you will, and he returned the gesture with a half smile and a head nod. It was a good night.

There are a lot of facets in my life that have brought upon massive amounts of rejection. But I am proud of none of them except for in the area of employment. I’m not sure really what it is I am supposed to tackle in life. I have all of this writing experience but I have proof that it was all a waste of time. I also have a shit load of journalistic experience (again on the film side) but that’s done nothing for me too. All in all, all the skills I have are useless.

“Don’t be so hard on yourself, that’s not true. You’ll get something.”

Shut up, liar. You stupid bastard. You don’t know anything now, do you? I have proof here that I am going to rub on your stupid dumb head. Then I’ll sprinkle pepper in your eyes, like that chef from Burgertime, and watch you squeal around on the floor like Mr. Pickle.

I recently applied to be the editor of the calender section of one of this town’s wonderful publications. Surprisingly enough, I got a phone interview with the main editor. I was very excited by this. Almost two months went by before I got this, via e-mail:

Michael:
The calendar job has been filled, but I will keep your materials on file
just in case. Thanks for your interest.

Okay, that’s fair. Thanks for keeping me posted. So I applied to be this Web Content Editor for some news channel here. The job seemed exciting enough, and based on the massive amounts of experience I have writing for the web, I thought I’d at least get an interview. This came to me two days ago, again via e-mail:

Thank you for your interest in employment with Central Florida XXX/XXXX Networks for the following position: Web Content Editor. We have reviewed your resume/application and have carefully considered your qualifications. After this review, we have decided to pursue other candidates for the position.

Or is it “which describes me best…”? Anyway, I was reading this blog the other day and found myself in a sort of inspired mood. Apparently there is some online community out there that posts challenges for bloggers to tackle. The one attempted that I was reading was this:

You have a t shirt. You have to wear it all day, every day. It has one word about you, describing you in some way, written on it. It is from this word that strangers and friends draw their conclusions about you. What is your word, and why?

Describe yourself in one word on a t-shirt? Man, I have a hard time describing myself to others in anything smaller than a paragraph, but one word? That’s the business right there. I decided to take on this quest, however, no matter how long it would take. Sadly, it really didn’t take very long.

What word would I want to wear on a shirt that could describe me? It would have to describe everything about me. My hardships as well as my loves. Could this word also describe my looks and my persona? What about attitude, would it cover that too? This would have to encapsulate all of my misery, my misfortunes, my continual fuck-ups, my lack of finance, my newfound baldness, and my hatred towards guys who wear sleeveless shirts.

I played baseball as a youth for too many years to count. Would this word be able to describe that too? Or how about my 5 year attempt at skateboarding? This word would even have to inform others of my juggling abilities. And my progress as a freelance film critic. Or as an artist who gets paid for his work. It would even have to describe my brief career in filmmaking.

How can one single word say all that? After much time and debate, I found the right word. And I drew what it would look like on a t-shirt. And I would wear it everyday. 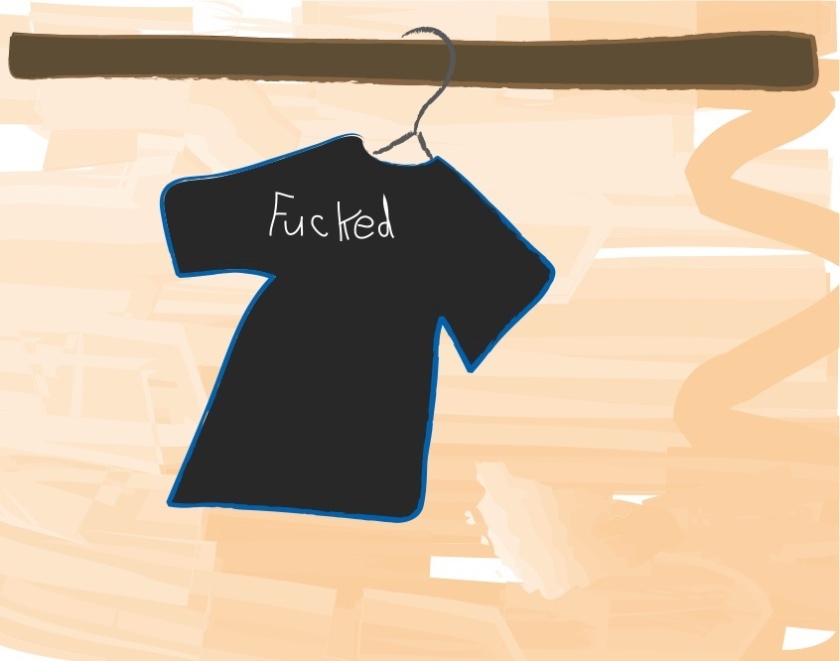 As my last entry can tell you, I’ve certainly involved myself in some of the joys (and perils) of alcohol. Tonight, as I watch The Wolf Man (1941), I stumbled up this story at Reuters about some crazy drunk priest.

Over in Monterrey, Mexico, a priest was out chillin’ like villain (feelin’ nice), putting beverages down his gullet like Vick put down dogs (sorry those never get old to me). Some driving occurred, he got pulled over, then decided to punch the cop. Yeah, punch him! Nevertheless, he spent some time behind bars, but not too much time. Still it must be pretty funny to be punched by a priest.